Collage is an anime, manga and videogames TCG by Morisawa. The TCG opened for prejoin August 4, 2012.

After being opened for a year Morisawa decided to close Collage. She decided that she could not balance it with her busy real life and is currently closed or inactive. The site was undergoing a large revamp to it's unique scripts and was never re-opened.

There are four types of decks on Collage: Character, Environment, Series, Special.

Character decks feature characters from various anime, manga or video games. Each deck has 25 cards and are worth 1. The first 10 cards are normal cards, while the latter 15 are a puzzle.

The environment decks are 15 carded puzzle decks worth 1.

Special cards features a variety of different themes and they are worth 2 each.

Member cards are worth 0 and may be traded freely between members, they do not count toward trades. For every 10 member cards collected a player may claim a mini mastery.

Once the player has collected all of the cards in a deck they will obtain the master badge. Mastered decks cannot be traded off. If a player is the first to master a deck they will get a special badge with the "first" label and receive an extra reward.

Collage uses some currencies. They can be exchanged on the website for choice or random cards.

In order to complete a Series Collage, the player must have mastered 2 character decks of the same series. He needs 3 Series cards from the same series as well as 2 types of currencies: 1 glue stick and 1 Art Book. 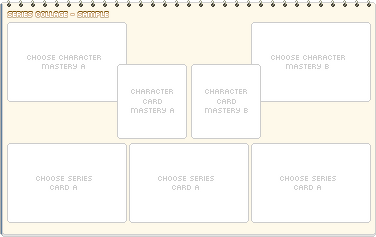 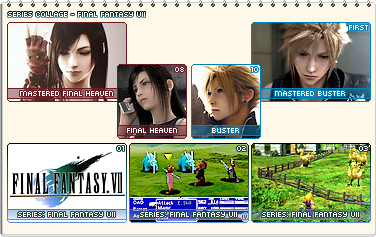