Special Place is a Horror video and game movie TCG by Nyaasu. It has not been updated since November 2013.

On January 28, 2012 Nyaasu closed Special Place to revamp the entire TCG. The website opened it's doors again April 1, 2012 with a whole new template.

The TCG expanded once again on September 2, 2012 to include horror movies.

All decks are worth 1.

Member cards are worth 0 and may be traded freely between members. For every 15 member cards collected a player may claim a mini mastery.

Levels are based on card worth with 15 levels total.

When a player has collected all 12 cards in a deck, they obtain the mastery badge. Mastered cards cannot be traded off.

Before the change Special Place had two forms of currency: ammo and a choice coupon. 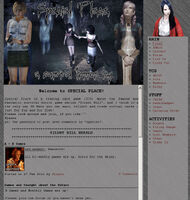